Jumping Off Bridges with Whistler Bungee 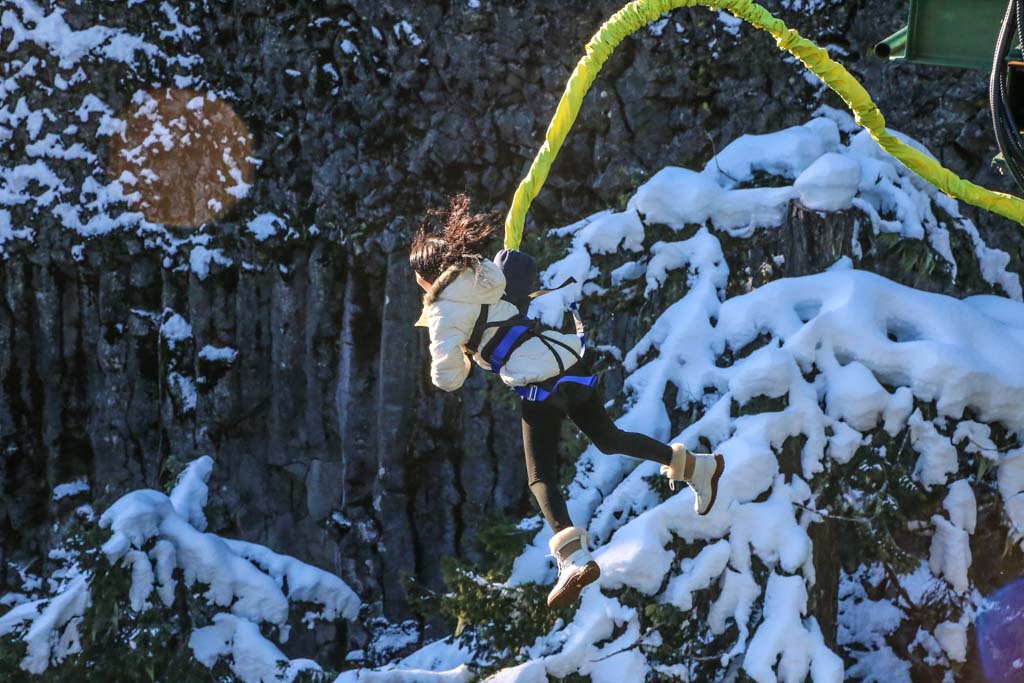 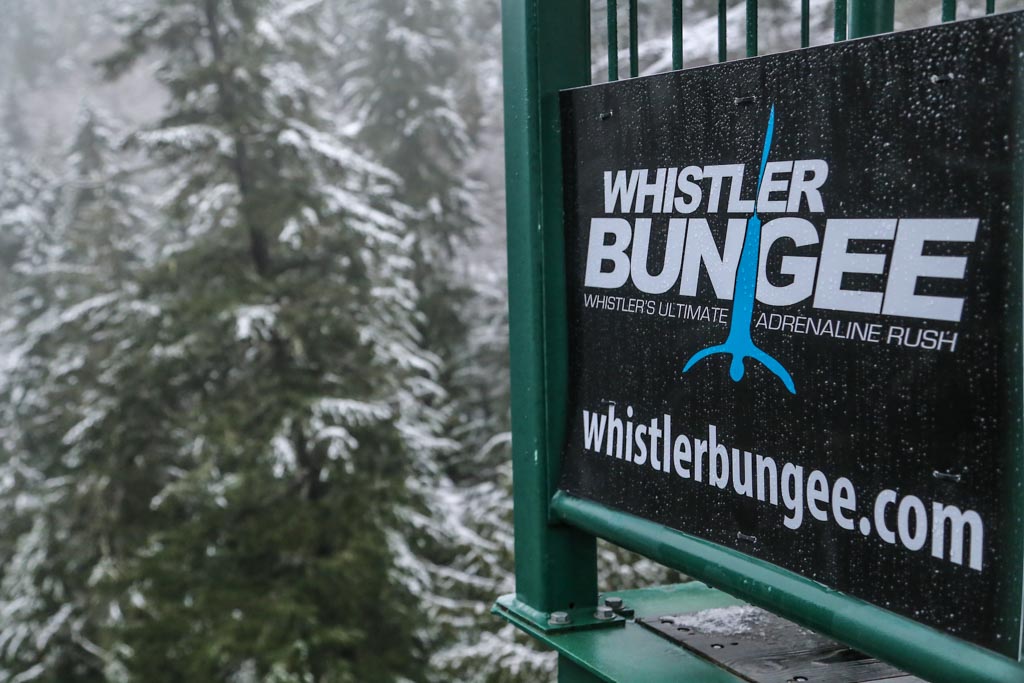 A bad case of FOMO strikes again! Immediately after enjoying the scenic landscape at Sea to Sky Gondola, we jetted up to Whistler for our first ever bungee jumping experience. (I scheduled it for our first day in Canada on purpose; I was having major nausea/anxiety and I needed it to be over with!) 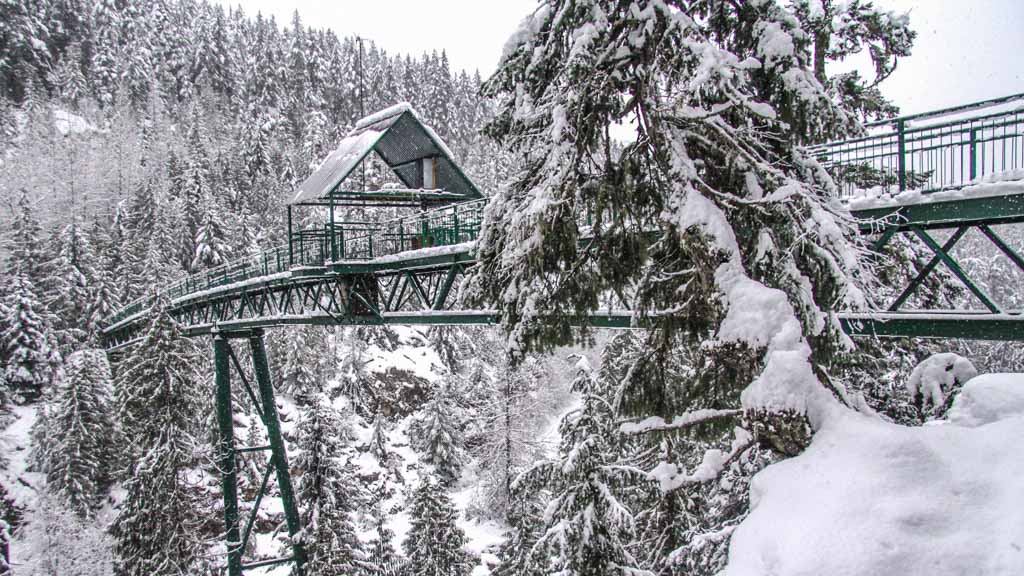 I really don’t know how I find myself in these situations. I’ve gone skydiving before, and that took A LOT of coaxing and mental preparation. I swore to myself to never go bungee jumping, yet there I was nearly in tears on a 160 foot bridge in Canada. 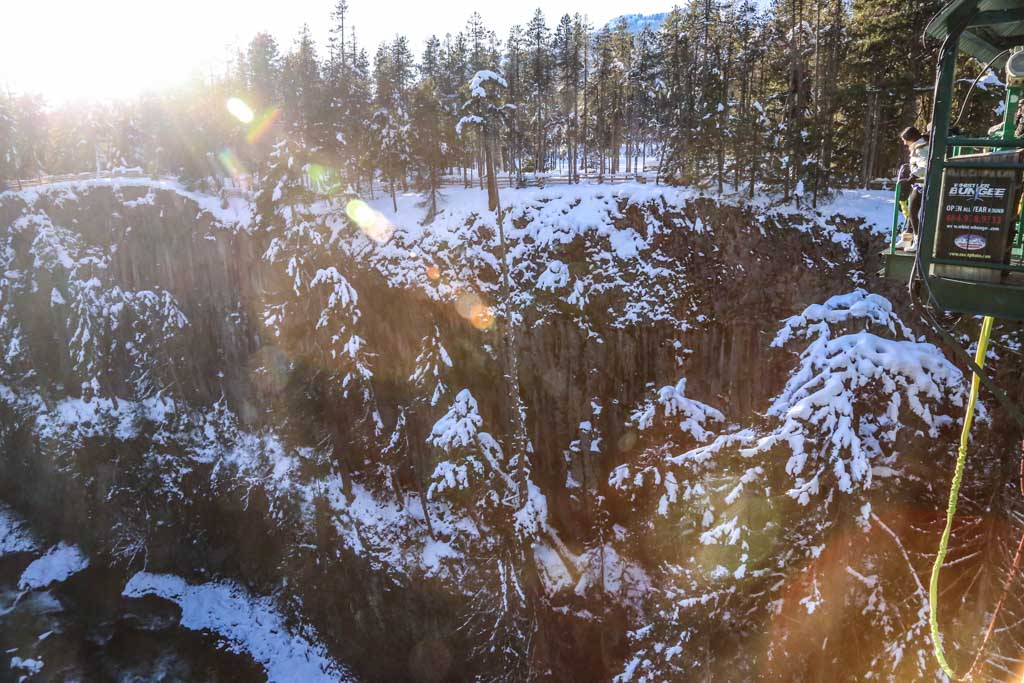 The entire process was pretty quick and painless, which was nice as I was really worked up about the whole thing. After arriving you fill out some liability waivers, get weighed, and watch others take giant leaps of faith as you prepare to suit up in your harness. The surrounding area is insanely serene, so you also have time to take some sick snapshots and video footage. 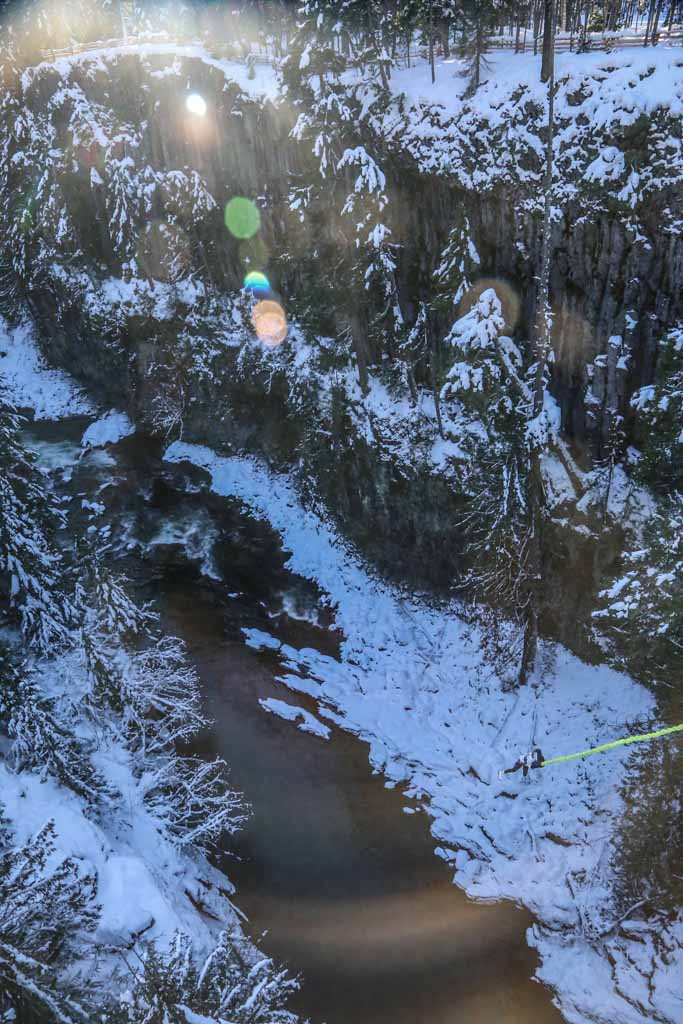 I decided to go before Jarden as I wanted to get my jump out of the way. The guys suiting us up and checking the equipment were very cool and made attempts to talk me out of my nerves. I liked that there was no fluff here though, they suited you up, gave quick and clear instructions, and there you are on the ledge, staring at the river 160 feet below you. It seems as if they don’t give you too much time to overthink the whole thing, nice one guys! 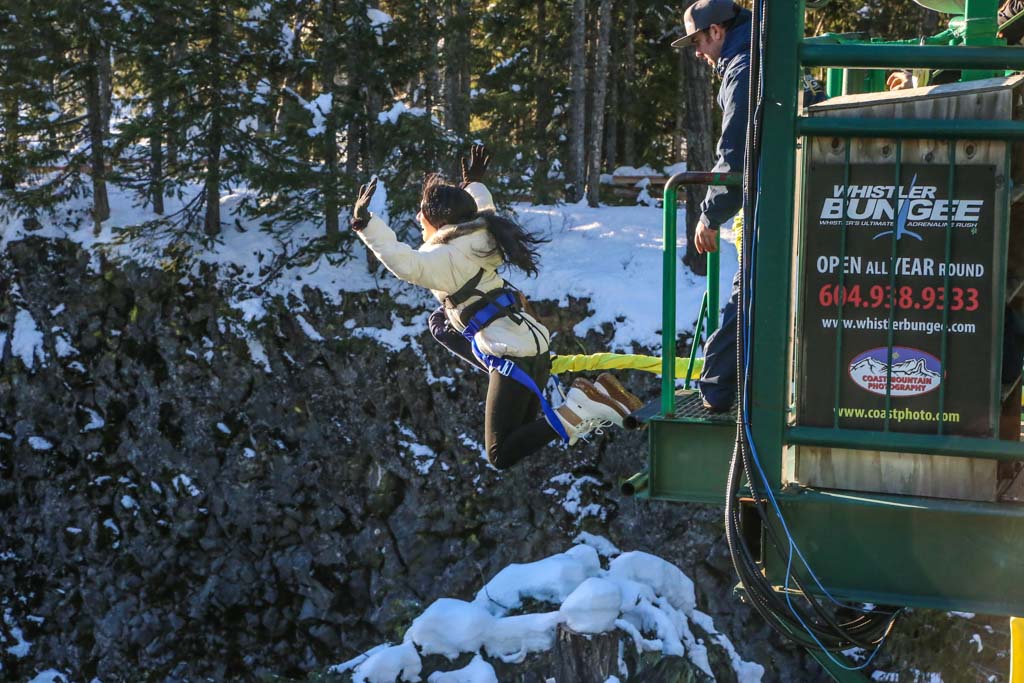 MY JUMP WAS EMBARRASSING TO SAY THE LEAST. 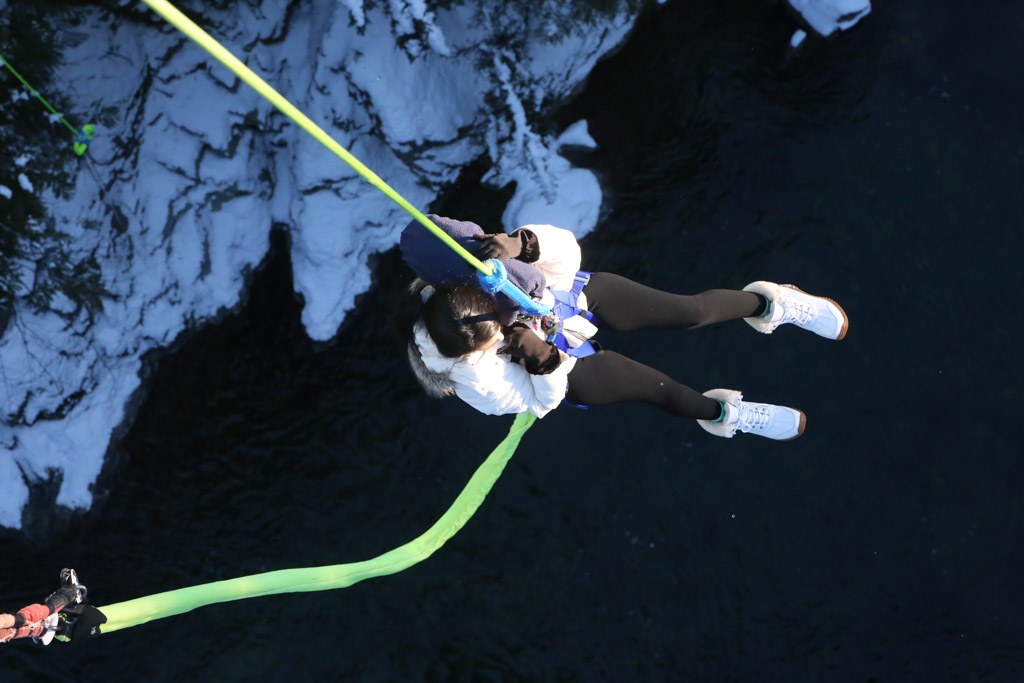 I more so fell off the bridge instead of jumped, and the immense feeling of falling such a far distance produced an awkward squawk from my vocal cords. I quite enjoyed the little recoil bungees at the end; those butterflies I could handle. When you’re done they send down another bungee that you clip to your own, and they hoist you back up, which was a slow and still pretty nerve-wracking for me 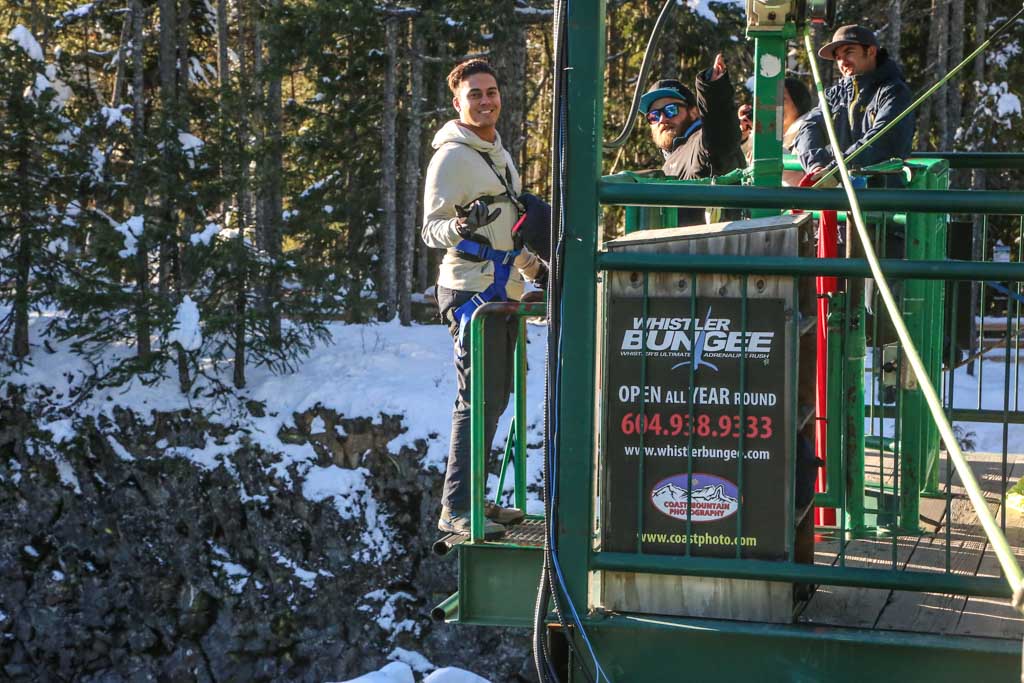 Jarden had probably one of the most graceful jumps ever, he looked like a pro! 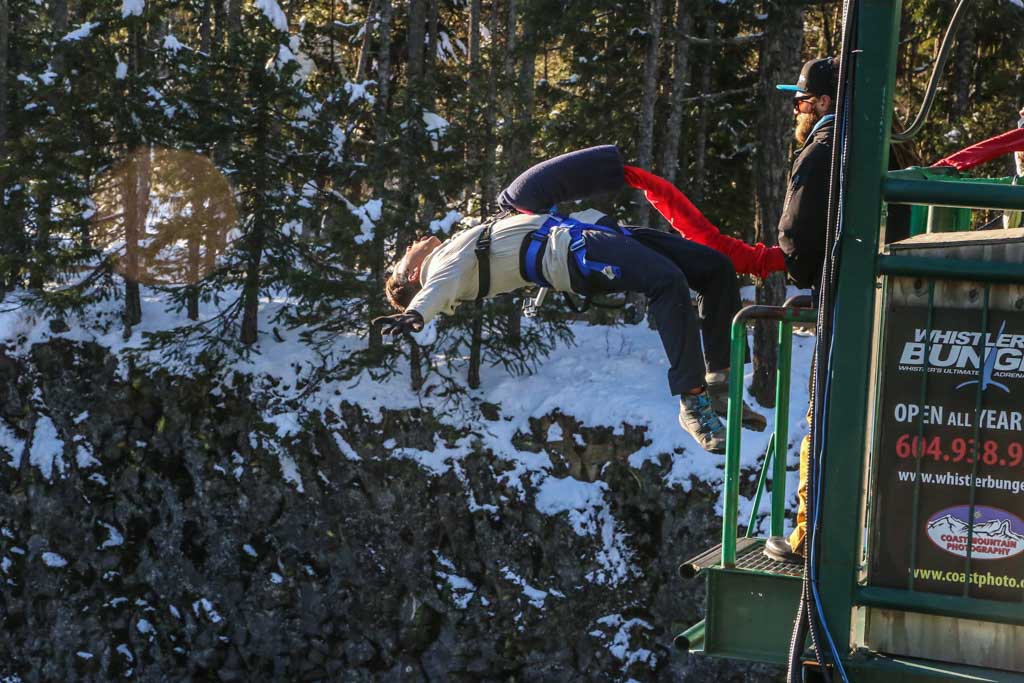 Of course his first bungee jump had to be a back flip; he loves all of these terrifying, adrenaline-inducing activities. I definitely wouldn’t have been on that bridge if it weren’t for him; he brings out the risk-taker in me! Immediately after he was saying he wished he could go again; as for me, I’m not too keen on repeating it anytime soon! (I won’t say I never will though, because you know how that goes.) 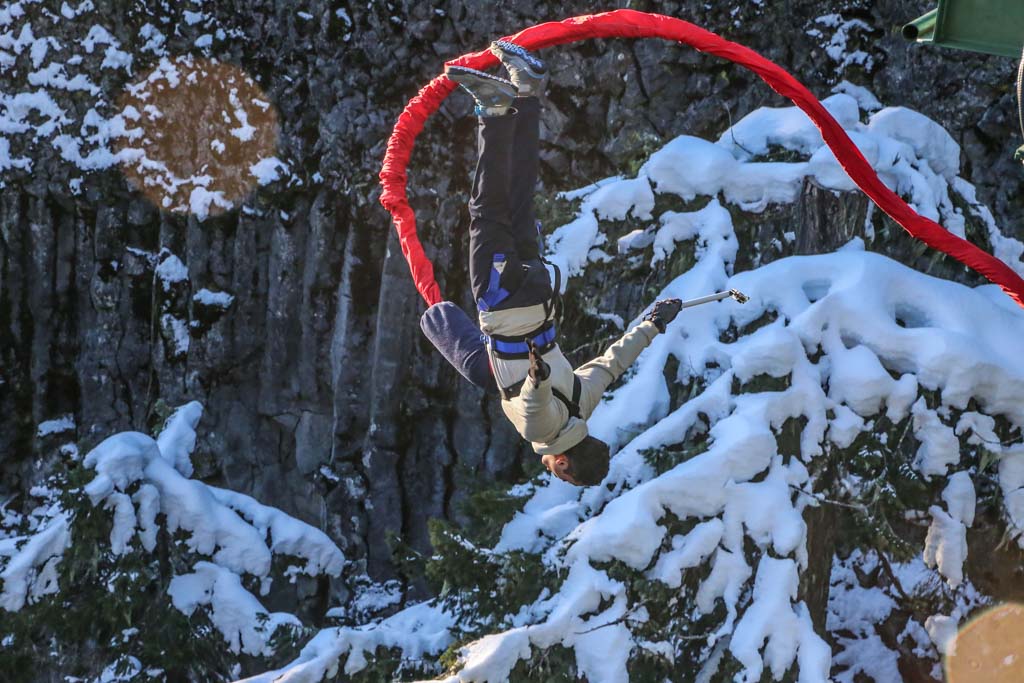 Afterwards we went to check out our pictures. We had two of our own go pros set up for video footage (along with our vlog camera), but we actually bought the photos that their photographer took as well. (He got some great angles!) We were also surprised with 2 free t-shirts that everyone gets after a successful jump; a token of our bravery! 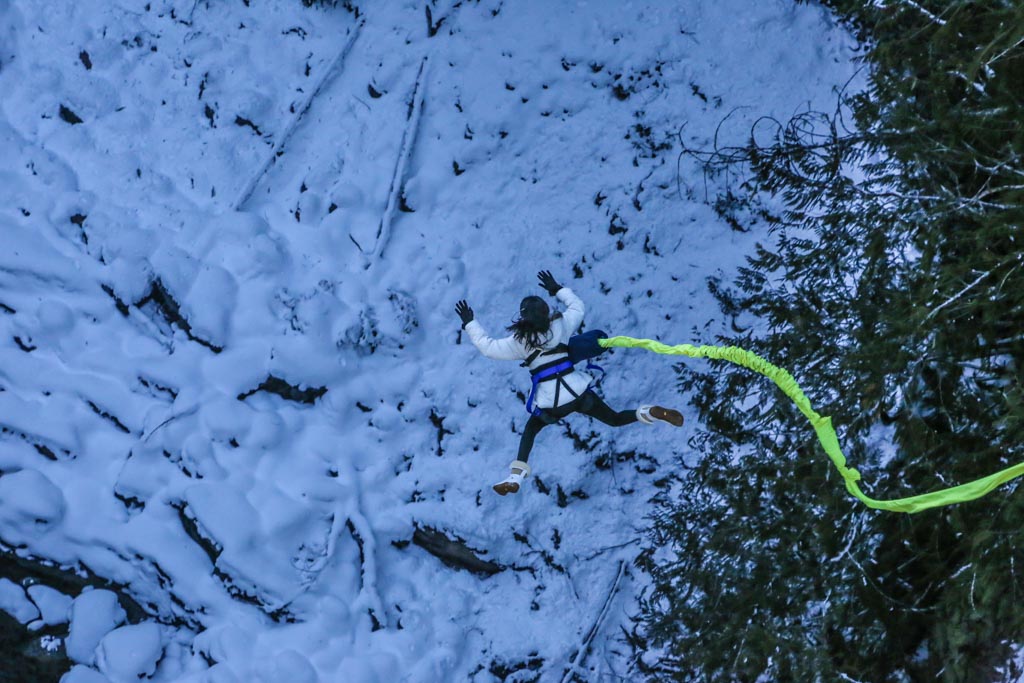 Overall it was a great experience and I would highly recommend Whistler Bungee if you want an insane adrenaline rush! The team was friendly, safe, and again it’s a surprisingly quick process. We’ve jumped out of airplanes and off of cliffs, but the feeling of bungee is entirely different; you just need to try it out for yourself!

When in Whistler, jump off a bridge!

Thank you to Whistler Bungee for providing us with a media rate. All opinions are our own.

The Sea to Sky Gondola in Squamish, British Columbia

Absinthe Fountain at Lewers Lounge – Things to do in Waikiki