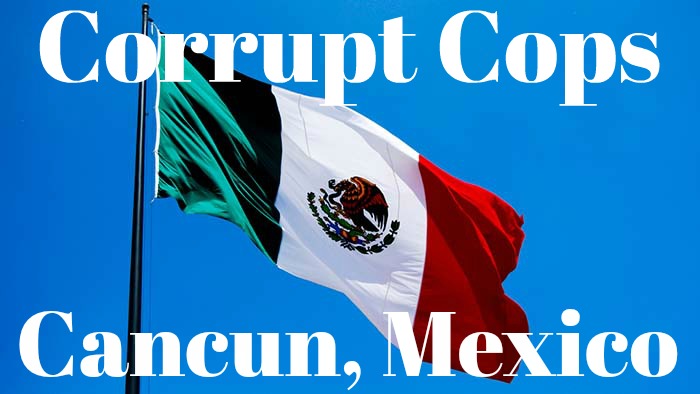 The title of this post may come as a shock to some of you – YES we essentially got ‘robbed’ in Mexico. I didn’t post about it on social media until now – I needed time to process and let the situation pass before I talked about it again.

It was a real blow for something like this to happen to us – in all our travels over the years, nothing like this happened since our first time abroad together, way back in 2011 when we got robbed in Athens, Greece. I much more expected to be scammed while we jaunted around Europe or Central America, not while driving in the ritzy, hotel zone of Cancun. Here’s how it happened:

It was 5am the morning when we were set to leave Mexico, and all things considered, our entire stay went without any major incident. We spent a few wonderful days in Tulum, took a rental car up to Playa Del Carmen, drove through the backroads to Chichen Itza, and spent a couple of days in touristy Cancun. Hundreds of miles were driven across the Yucatan Peninsula, and we passed numerous police and government officials, made it through some sketchy neighborhoods in the middle of the night, and had no problems whatsoever – in fact everyone we met was pretty nice, which I guess left us with my guard down.

Our bags all packed into the back of our rental, we set out to catch our 8am flight to Cuba. The normal bustling hotel zone of Cancun was quiet and empty at the crack of dawn as we started the mere 20 minute journey to the airport.

5 minutes after we left our hotel, we saw the blue lights flash in our rearview mirror.

Confused because there was no siren, and because we did nothing wrong, we pulled over onto the side of the road. A cop arrived at our window, proceeding to tell us that we were speeding. Jarden was driving, and he knew for a fact he was definitely not speeding, but we explained our case to no avail. The cop then told us that we would have to pay 4000 pesos, an equivalent of about $210 usd, or else Jarden would be taken to jail.

Now most people would instantly recognize this as a scam – obviously paying off cops in cash is not the legal route. I honestly research A TON of scams before going to a new-to-me country because of our incident in Greece, but for some reason Cancun slipped my mind. I guess I assumed that touristy Cancun would cause me the least amount of problems because it is so developed and frequented by thousands daily, but it turned out to be direct opposite. While I knew this cop was just trying to shake us down, my brain failed to think about just giving a smaller bribe.

Jarden only had about 1000 pesos – I blame this next move on me being tired because it was 5am and I only had a couple hours of sleep, but I then mistakenly pulled out my wallet to cover the rest of the made up ‘fee.’ I only had a few hundred pesos and 2, $100 usd bills, (another mistake – break small bills!). At that moment I thought my pesos wouldn’t have been enough, so I handed the 2 $100 bills to Jarden, in which the cop greedily snatched up along with the  1000 pesos, and then left us to go on our way. We ended up giving him about $250 usd, way over the 4000 pesos he was asking for.

We were crushed, slowly taking in the reality of what just happened. As we went to return our rental car, we met another couple where the exact same thing just happened to them a few moments before, but they only had $80 usd, in which the cop (probably the same one?) accepted. I felt even worse then, thinking I could have just given my few hundred pesos and the cop would have been satisfied, but of course hindsight is 20/20.

The details of the situation became more clear as time went on – the cop didn’t turn on his siren as to not draw attention to his corrupt practice. It’s also common that dirty cops prey on tourists heading to the airport – it was clear from our rental car and luggage peeking through the window where we were headed. The cop also mentioned that if Jarden went to jail we would surely miss our flight, so it’s clear that he scams unsuspecting tourists at that early hour time and time again.

All in all, things could have been a lot better, but of course things could have been a lot worse. I know for a fact I could have given a smaller bribe – people have walked away with only giving $50 bucks or less, so that really hurt. I’ve read recent stories of people standing their ground and calling the cops bluff, in which the cop gives up and drives away, but I also heard of people calling bluffs and getting thrown in jail for refusing to cooperate. It’s hard to say what to do in a situation where the police force is so corrupt.

While I don’t want to deter people from traveling to Cancun, the situation did leave a really sour taste in my mouth. It’s a sad truth that tourists get wrongfully thrown in jail and extorted on a daily basis, and of course the situation all depends on the cop and their mood. It’s definitely a learning experience though – I should have carried smaller bills, I shouldn’t throw all my money at the first ‘official’ who asks, and touristy, developed areas doesn’t always mean “safe.”

We did though get a huge life lesson in bribing – Cancun has surely prepared me if I ever get pulled over in Southeast Asia! There’s always a bright side right? 🙂